Lundby or not Lundby, that's the question

These days there are lots of dollhouse items out there that has been home made. There are lots of skilled doll house fans who do things like 3D-print, or sew new bedding for old bedframes. I have several home made items myself, and I really like them! The relatively low cost of global shipping also means that lots of previously unknown items from other markets like China more frequently show up on Etsy, ebay and other global shopping websites.
But this also means that questions about what's original has come up more frequently. So how do I know what I'm looking at? What is it? Is it Lundby or another brand? Home made? How old is it? Here are some ideas on how to spot the difference, and how you can learn more about the age and origin of your item.
1. Check out the online catalogues.
If its'a Lundby item, there's a good chance that the item will be in the catalogues, even though there are a few exceptions (especially before 1967 and in the 1990's). Before the mid 1960's there are very few catalogues, ads or other documentation. There were also lots of crossover items between Lundby and Lerro, meaning that they were manufactured and/or sold by both companies. This makes it harder to determine the particular brand of older pieces of furniture.
It might sound boring, but browsing through online catalogues and ads will give you an idea about what's out there. It will also give you an overview of the design style and materials that Lundby and other brands used, and when they used them.
Currently the best source for online catalogues is this one: https://www.swedish-dollshouses.se/?page_id=1191
2. Check out other online resources.
There is an excellent reference library in the FB Lundby Lovers group where you can find information about several brands (including Lisa, Hanse, Brio, Barton and many more). Here's a link to the group:
https://www.facebook.com/groups/lundbylovers/
Here's a direct link to Lundby Lovers Reference files:
https://www.facebook.com/groups/lundbylovers/permalink/10157502174722201
You can also find lots of old Lundby advertising online. Sometimes they will show you items that the catalogues don't. But they are not 100% - if it's a retail chain selling Lundby, they might sometimes include other brands in their own advertising. So check out who published the ad.
I would also include "ask friendly members of online communities" in this category. There are many people in all the dollhouse Facebook groups who knows a lot and often take time to share their knowledge.
3. Does it look identical to a known item, but has different colour or fabric?
That's usually a great clue. Here's one example. This bathroom doesn't show up in any of the catalogues, but it has the same parts and design as several other Lundby bathrooms from the same time. This is not always 100% proof that it's Lundby, but it's one of the tools you can use. (I have seen this in original packaging, so yes, I know it's Lundby). 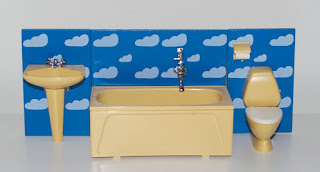 I've sometimes determined that an item is original by the fabric found in other items that I know for sure are Lundby. Like this bed. It doesn't show up in any of the catalogues, but the curtain does. So it's safe to say that the bedding (and bedframe) is also original Lundby. 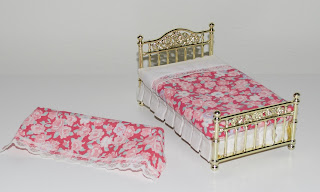 4. Have you seen the item with the original box/packaging?
This is a great clue, not just to determine what brand it is. Lundby's boxes has changed every now and the, so if you find this box, you can tell that this item was sold in the late 1960's or early 1970's. The design changes (very roughly) every 5-8 years.
Seeing the item in its original packaging has another advantage. It helps to find some items that were produced for two (or more) companies. Here's an example: 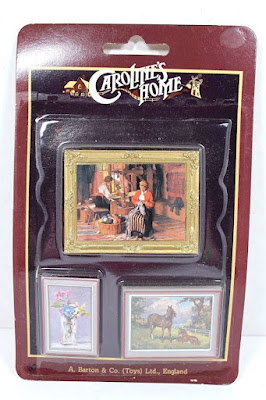 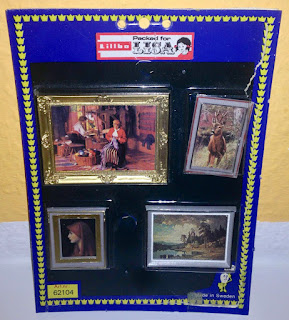 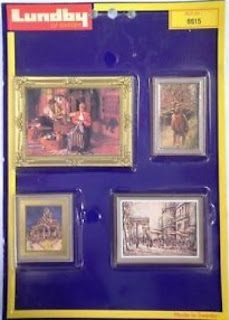 This tells us that at least the two upper paintings were sold by two different companies. Just to make things more complicated, they were made by Sufa, a company that provided lamps and paintings to Lundby in the early 1970's. So the producer is Sufa, the distributing company is Lundby and others.
Some items with a long shelf life can also be found in several different boxes. This is an example. 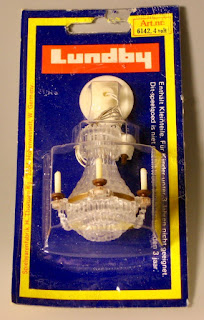 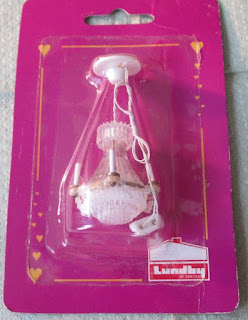 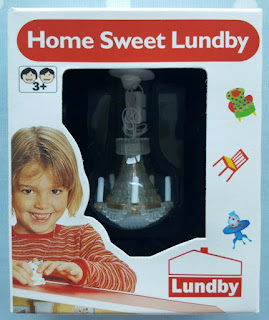 5. But if we don't have an original box, and we can't find it in the online catalogues?
Well, there are still some ways to figure out if it's original Lundby. One is to find out if it has showed up before in other colours or with other fabric.
Here's and example. This bed (with this particular bedding) is not show in any of the Lundby catalogues from the 1990's. But the bedframe is the one used in the 1990's for other beds, along with the nightstands. That's a sign that points towards Lundby. The lace on the bedding is also used in other bedding that we know was produced by Lundby. 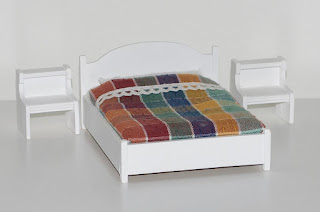 And here's another clue. There is a matching set with a sofa and an armchair. This set convinced me that the bedding is indeed original. 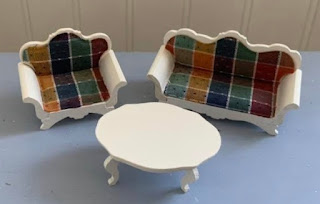 But things aren't always this easy. I bought a bunk bed a couple of years ago. It looked like this: 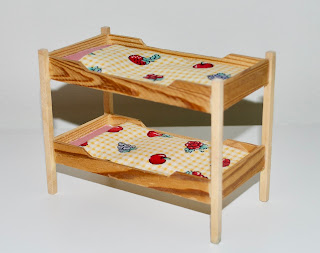 I remembered that I had seen this bedding somewhere before, and I knew that some bunk beds from the 1990's had pink pillows. So it made sense to think that it was original. And then I got this photo from Elisabeth at Swedishdollhouses.se.... 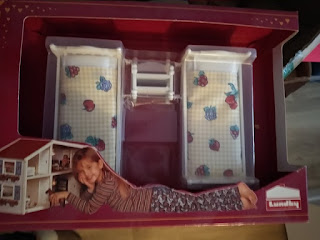 I was partly right. The bedding was indeed original. But it belonged to a couple of twin beds, not a bunk bed. And the pillows were white, not pink. The box also confirmed that this set was produced somewhere between (ca) 1990-1997. So, done deal! ....until I found this picture. It's an auction from Tradera. 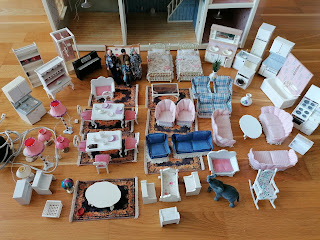 Larger auction lots can actually give us some information, since it's very common that the furniture in the auction was bought the same year, or at least in a few years range. This looks very 1990's, doesn't it. But take a look at the bed behind the dolls at the top of the picture. Here's a close-up: 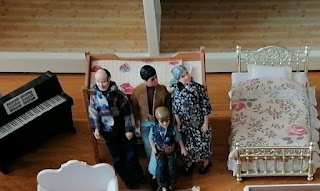 Well hello there, bunk bed... :) How likely is it that two people switched the bedding from twin bed to bunk bed? A year later, this lot of furniture showed up on Tradera: 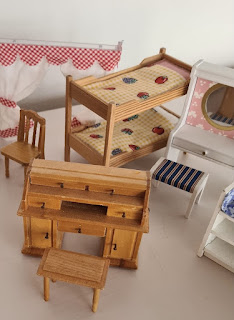 Did Lundby make both a twin bed and a bunk bed with the same bedding? Right now I'm not sure, but I think they did. I've seen this three times now as a bunk bed, and once as twin beds - that time in the original box.
Oh, and by the way: there's also a version of the Lundby Rose bed to the right in the first picture above. This bed isn't shown in any catalogues either, but it has shown up at several auctions on Tradera, and more than once with items from this timeframe. I think it's safe to say that this is also an original, and from the 1990's.
I think that's it for now. Perhaps you have other methods to determine what's Lundby original. Let me know if you do! Meanwhile, I hope this might help you to find out what's Lundby and what's not.
Upplagd av ordningsfrun kl. 13:57 Inga kommentarer: